A rendering of an actin(red)-microtubule(green) network

I recently developed an algorithm for our collaborators at University of San Diego to track networks made by polymerizing 2 types of biological filaments simultaneously. The data set was temporal z-stacks from confocal microscope in 2 different wavelength. This is an example of 5 dimensional data with 3 space dimensions, 1 time dimension, and 1wavelength dimension.

We used a hybrid approach for developing this tracking. Initially the images were split into multiple channels corresponding to different wavelength. Then we run a feature detection routine to track cross section of filaments in each slice of image. These features were then sewed along the depth axis using a particle image velocimetry (PIV) routine, to create networks. This process was repeated for all temporal stacks to create a 3D map of network dynamics. Finally different channels were rendered simultaneously in POV-Ray.

This approach has allowed us to look at structural changes in the network geometry. We have also been able to extract response time scales of system by quantifying temporal de-correlation.

Microtubules are essential component of a cell. They are responsible for its structure, locomotion and vital intracellular processes. Due to their large persistence length microtubules behave like a rigid rod. Due to this rigidity a network of microtubules was supposed to be non-contractile.

Now in a new study we show that a network of microtubules, cross-linked by MAP65 proteins and driven by kinesin-1 molecular motors can contract. We quantified this behavior by measuring temporal evolution of 2nd moment of shape of network. We also proposed a sliding  mechanism to explain the global contraction. In this model the microtubules are driven relative to each other by kinesin-1 motors and when there is sufficient overlap the MAP65 cross-linker binds the microtubule. As MAP65 only binds microtubules that are antiparallel, i.e. are moving towards each other, the net result is an overall contraction. 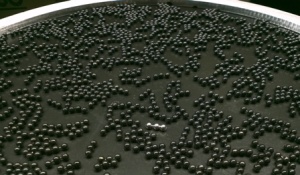 Diffusion of rod like particles has been extensively studied in polymer dynamics literature. An interesting result there is that rod like particles diffuse twice as fast along their length as they do perpendicular to their length. Also diffusion coefficients along these 2 directions scales differently as the volume fraction of particles is increased.

Motivated by these results, we designed a simple experiment to study effect of shape anisotropy and volume fraction on diffusion of granular rods. Our experiment consisted of a mono-layer of bead chains in a vertically vibrated container. We tracked position and orientation of a tracer rod (differently colored but completely similar in other respects) to calculate statistical measures of translational and rotational degrees of freedom. In particular we observed that the in-plane orientation auto-correlation function decays exponentially with time at low densities, but increasingly slowly as density is increased and with a form which is not described by a simple exponential function. We also observed that the mean square displacement of the chain center of mass grows linearly at low densities, but grows increasingly slowly and non-linearly as number density was increased.

By decomposing the displacements parallel and perpendicular to the long axis of the chain, we found that the ratio of diffusion coefficient in parallel (

) to their long axis was less than one in dilute regime. However, as the number density of the chains was increased, the ratio rapidly increased above one with a greater value for higher aspect ratios. We explained this  anisotropic behavior by considering a higher effective drag on the rods by the substrate in the perpendicular direction compared with the parallel direction, and by tube-like dynamics at higher densities.

Rod like polymers are known to show an entropy driven isotropic to nematic transition as their volume fraction is increased. We show an ordering driven by mechanical stability in rod like granular material in a vertically vibrated container. We studied rods of 3 different aspect ratios (

) was defined to be the ratio of number of rods (

) in a given cylindrical container. We increased

from 0.1 to 1.0 in steps of 0.1. The vibrating container was stopped quickly to create a “frozen” state of rods, which was then scanned using a X-ray Micro CT scanner. Using a home-grown Matlab routine we tracked position and orientation of each rod in the container. We observed that rods of

. On the other hand rods of

to values higher than 1 we were able to produce multiple stacked layers of ordered rods. We showed that global as well as local ordering decreases as the number of layers in the container is increased and attributed it to inefficient energy transport from vibrating plate due to inelastic collision between various layers.

Armed with our ability to track rod like particles accurately in 3D, we are trying to understand the relation between macroscopic stress response and microscopic rearrangements in random assemblies of granular rods under cyclic compression.

We create random assemblies of rods by rain deposition in a cylindrical container. To measure the stress response this assembly is compressed with a top plate fitted with a force sensor in 50

m steps until a predefined top stress is reached, then the assembly is decompressed to a 0 stress state. A typical experiment consist of 1000 such cycles. The packing is also scanned after every

steps (n = 0,1,…5) to track changes in micro-structure. We track position, orientation and number of contacts of each individual particles.

Considerable hysteresis is observed over the first few cycles, but the response starts to approach a more reversible path with each cycle. We observe that rods of small aspect ratio tend to have small compression under the same stress as compared to rods of higher aspect ratio because they pack more densely, and thus have larger Young’s modulus. The stress increased non-linearly for all values of strain. The stress-strain response of rod packing showed 2 distinct regimes and were explained by accounting for bending and local compression of rods.

We showed that the assembly of shorter rods is not just stiffer but also that it strain stiffens at a faster rate compared to rods of larger aspect ratio. By tracking motion of constituent rods over subsequent cycles we observed that larger number of rearrangements take place in the bulk away from boundaries. The mean numbers of contacts were counter-intuitively found to be constant with increasing volume fraction.

We designed a simple experiment to study erosion of cohesive granular media due to sub-surface flow. The setup consisted of a Hele-shaw cell of dimension 150mm x 150mm x 1.5mm filled with an erodible media made of spherical glass beads of diameter 100-130

m. To make the erodible media cohesive we mixed a small amount of 5% Water-Bentonite mixture as a binder. We controlled the cohesivity in the system by controlling the amount of binder in the system.

When water is pumped through this porous medium the binder dissolves and loose beads are advected out of the erodible medium, and an initially uniform flow of water through the porous medium gets localized into channels over time. We described a channelization event by decomposing it into 3 parts: saturation by wetting front, emergence of instability and material failure. We observed that a higher binder concentration reduced mean width of channels. By applying Cornish’s model of flow through a rectangular pipe to channel width statistics we were able to estimate the mean attractive force between granular beads and showed that it increased with  an increase in amount of binder giving rise to thinner channels. We observed that shape size and nature of channel is also controlled by volume fraction of porous material.